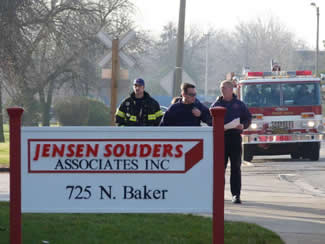 There were seven different fire agencies participating as well as the Du-Comm mobile dispatch unit. There were a total of sixty one fire personnel and police officers involved in the hazmat drill and ten different pieces of fire equipment including two ambulances, two hook and ladder trucks, and three pumper trucks. The MABAS division 12 hazmat response team brought their three hazmat incident trailers and had them staged in front of our facility in the street. These trailers are mobile command centers with all the equipment needed to respond to a hazmat incident.

Upon arriving on the scene the incident Commander assesses the situation and calls for more help from other departments if needed. The Command officer will then have all of the responding personnel separate into their response teams; Entry, Safety, Hazmat, De-con, Science, and Re-con Team. All of these teams are coordinated by the Command officer and each one knows their roles.

We at Jensen Souders found our involvement in this drill very interesting and informative. A few of the things we learned was to have a way to access our security cameras and SDS computer program remotely. Another suggestion was to have small size handouts of our facility layout so the responding firefighters can see the floor plan before they enter the building. These were recommendations from the Fire fighters involved in this drill after they saw our facility and procedures. We would recommend any company storing and working with hazardous material to get involved with these hazmat drills with their local First responders.